A few days ago I stumbled across Space: 1999 going on Amazon Video for £9 for a full season.  So the entire run was available for less than £20.  Remembering that UFO was the prequel series to that massive part of my childhood, I then looked for a copy.  Didn’t find it, but I did find the DVD box set for £15.  So I was forced to indulge.

I’ve already watched the first few episodes of Space: 1999… and it’s certainly a lot more cerebral than anything you’d expect from Gerry Anderson.  Dragon’s Domain (the last one I watched today) was pretty damned dark and all the money spent on the most expensive TV show made in the UK at the time, was all on the screen.

Going back to UFO, it starts with a group of kids filming a UFO on their cine camera and getting gunned down for their troubles in a pretty brutal opening, and it doesn’t really let up from there.  Ed Bishop’s Colonel Ed Straker is a haunted man.  Something’s obviously happened in his recent past.  His decade as head of SHADO have not been kind.  OK, there is some dodgy 70’s attitude stuff (note Alec Freeman’s seriously creepy “flirting” with a new female SHADO operative he meets walking down to the operations centre).  Yeah… Freeman’s a bit of a creepy letch.  Especially when he meets SHADO’s chief engineer, Virginia Lake.

Nice to see Anderson stalwart Shane Rimmer’s turn as Freeman’s co-pilot aboard the SHADO transport.  Also very interesting to see women in positions of authority (even if they can’t resist having Gay Ellis touching up her make-up before one of the UFO’s makes an appearance).  Also very interesting to see that the interceptor squadron leader is a black guy.  And he doesn’t die in the first encounter!  Makes a change.  They can’t hit a barn door at three paces (in the first two episodes, for six missiles fired, none of them hit and the pilots themselves don’t seem capable of taking evasive action when a UFO is bearing down on them, without being told what to do).  Dropping by the Gerry Anderson website, there’s an article about the interceptors. 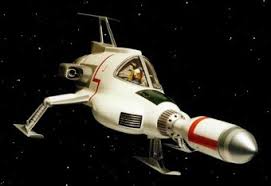 Derek Meddings (who conceived them) suggested the nuclear missiles loaded onto the front of the interceptors were cluster bombs – on reaching a specific distance from the ship, they release a swarm of missiles, carpeting the whole area in explosives, thereby increasing the chance of a hit, since going one-on-one would be like (and I love this similie!) trying to fight a jet fighter on a mobility scooter!

But fuck me, Alec Freeman’s creepy! 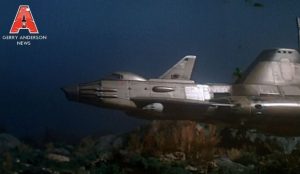 The Captain of the Skydiver is also a non-white character, and he survives!  He’s even a well-respected fighter pilot!  It just shows how ahead of their time Gerry and Sylvia Anderson were.  This really is proper, hardcore SF.  As a fan of the genre as a whole, even from just this first episode, in terms of it’s complexity and atmosphere of impending doom, UFO is streets ahead of the likes of Star Trek.  There’s no real comparison with that other UKSF Juggernaut, Doctor Who, because the audience is entirely different.  This was Gerry and Sylvia Anderson stretching their creative muscles… and aside from the dodgy 70’s attitudes in relation to female characters, and the 60’s fashions… it’s fantastic stuff.  The score’s very dated too, but when it’s composed by Barry Gray, firing on all cylinders, if you’re not at least nodding along by the time the opening titles finish, there’s really no joy in your life.

As Straker postulates, following the autopsy of the downed UFO pilot, the aliens are from a dying planet with a sterile population.  They see Earth as a source for spare parts.  You want macabre? How about Straker having to tell the aforementioned Skydiver skipper that the alien’s heart is a transplant from his sister, who went missing a decade before?